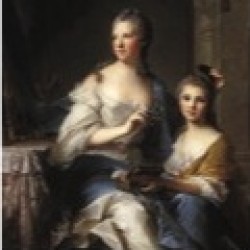 During the Renaissance, marked by the rediscovery of the ancient Greco-Latin culture and the invention of the printing press, a number of technical works in Italian and French included recipes for scented waters used to perfume clothing, body and homes, as well as recipes for dry perfumes held in pomander balls and fragrant “oiselets de Chypre” which were burned in the fireplace. These and scented gloves and belts and other fashion items introduced into France from Italy and Spain, contributed to the prosperity of the Grasse tanneries. Animal raw materials, highly prized for their spellbinding, aphrodisiac properties, also began to be included in many perfume recipes.

Thanks to scientific research, the Renaissance made it possible to considerably advance the art of perfumery: chemistry replaced alchemy and improved the distillation and quality of essential oils.

The new sea routes discovered by Spain and Portugal put an end to the hegemony of Venice. Christopher Columbus brought vanilla, Peru and Tolu balsams, copal, cocoa and tobacco back from the New World. After discovering the way to the Indies by sea, Vasco da Gama brought back cinnamon, benzoin, frankincense, ginger, pepper and clove.

The great perfumers of the Renaissance were Spanish and Italian. The former drew their science from their Arab predecessors, while the latter made use of the wealth of their peninsula and the taste of the aristocracy and bourgeoisie for perfume. The princes themselves made their own essential oils and aromatic waters.

When Catherine de Médicis arrived in France to marry the future King Henry II, she brought her perfumer René Le Florentin. with her from Italy. He set up a boutique on the Pont au Change bridge near the Ile de la Cité in Paris and became famous for his perfumes… and poisons. He opened the way for many Italian perfumers to set up shop in Paris, particularly encouraged by Marie de Médicis.

The fashion of using perfumed products became widespread. The finest hides from Sicily, Sardinia and Spain, were tanned and perfumed. These scented leathers, called “Spanish leather”, were very fashionable in the 16th century.

A form of obsessive fear developed about baths. Water was thought to be a factor of contagion. People washed themselves less and less. In the 16th century, “washing” oneself meant pouring water on certain parts of the body. To thoroughly wash oneself, other terms like “scrubbing” were used.

Appearance began to play a more important role than actual cleanliness. The 16th century marked the beginning of the period when perfume was used to cover up grime. Fragrance was used for hygienic purposes to mask dirt and disguise bad odors.